This is happening today and tomorrow - sorry  not to have picked it up sooner ... 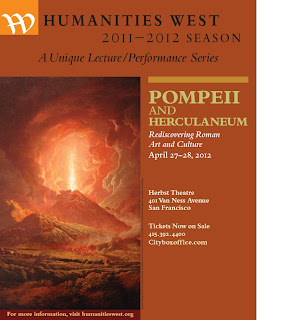 At the height of the Roman Empire in 79AD, a massive volcanic eruption from long-silent Mount Vesuvius tragically destroyed Pompeii and Herculaneum, creating an archaeological snapshot of everyday life in two very different towns. Buried, lost, and forgotten for centuries, the ruins of the bustling city of Pompeii and the nearby seaside resort of Herculaneum were accidentally rediscovered in the eighteenth century, triggering a wave of popular excitement about Roman art and culture and providing an inexhaustible resource for archaeological research. Ongoing scientific excavations and art historical investigations continue to offer fresh insights into ancient daily life and culture, the nature of Roman urbanism, how we understand the distant past, and how that past influences the modern world.Presented in collaboration with Consul General of Italy, the Italian Cultural Institute, the Center for Modern Greek Studies and the Classics Department, San Francisco State University

The Re-Discovery and Excavation of Pompeii and Herculaneum.
Gary Devore (Classics, Stanford University). The history of excavations in Pompeii and Herculaneum is the history of the Italian nation, and also of the discipline of archaeology. The ruins of the cities destroyed in 79 CE by Mount Vesuvius were discovered and explored by antiquarians whose groundbreaking work contributed to the development of modern scientific excavation techniques. As evocative examples of daily life in the Roman Empire, Pompeii and Herculaneum also became important symbols for the recently unified Italian nation in the 19th century. Dr Devore will give a short account of the destruction and rediscovery of both ruined cities, and show how developments in archaeological methodology and nationalistic goals united to elucidate this unique insight into the ancient Roman world.

The Economic Life of Pompeii.
Theodore (Ted) Peña (Classics, UC Berkeley). Pompeii provides far and away the richest body of evidence regarding the complex set of structures that characterized economic life in the Roman world. After providing an introductory overview of what we know about the economy of Pompeii, Professor Peña focuses on three topics chosen to illustrate some of the more important aspects of economic activity in the town and its surrounding territory. These include the large-scale production of wine for the export market, as evidenced by the Villa Regina and Villa B at Oplontis, the production of craft goods for local consumption, as evidenced by the Porta di Nocera pottery workshop, and finance, as evidenced by the archive of business records detailing the activities of the banker Caecilius Iucundus.

Ongoing Archaeological Research in Pompeii and Herculaneum: Perspectives from the Via Consolare Project.
Michael Anderson (Classics, SFSU). Such is the wealth of information at Pompeii and Herculaneum that significant questions yet remain to be answered, and the sites continue to be the focus of numerous international projects of archaeological research. Interest has recently centered on sub-surface excavation undertaken to explain how these sites developed and changed throughout their histories. Professor Anderson presents an overview of current archaeological research at Pompeii and Herculaneum, especially from the perspective of recent results of the Via Consolare Project in Pompeii, a project run from San Francisco State University, designed to augment and interconnect ongoing research by means of targeted excavation and architectural analysis at either end of one of the most important Pompeian thoroughfares.

Stephanie Pearson (UC Berkeley) introduces us to The House of Julius Polybius in Pompeii: the Altair4 Reconstruction. The House of Julius Polybius comes to life again thanks to an elaborate process of visual restoration achieved by Alessandro Furlan and his team at Altair 4 Multimedia of Rome for Professor Masanori Aoyagi of the University of Tokyo. Tens of alfrescos were digitally restored and the house reconstructed virtually, with the dynamics of the Vesuvius eruption and its impact on the house enhanced. A tridimensional technique leads the spectator to discover the rooms of the house, in all their details, including the exact position of everyday objects, precisely as they were found. The visitor experiences a house that is still "alive", just a minute before the catastrophe. Some rare historical pictures showing the house at the moment of its rediscovery have been superimposed and then taken away from the corresponding virtual images: this leap in time allows for the understanding and confronting of what has really remained of the house and what has been virtually reconstructed.

If These Walls Could Speak: The Paintings of Pompeii. Lisa Pieraccini (Art History, UC Berkeley). From the Villa of the Mysteries to the House of the Vetti, Pompeian painting reveals a rich world of interior décor that speaks to us not only of fashionable painting styles and popular myths, but of the very owners who commissioned the paintings. Close examination of the interior decoration of Pompeian homes and villas shows how home owners expressed their personal beliefs and social aspirations through the subject matter chosen to decorate their walls. Likewise, public buildings and tombs provide examples of paintings used to advertise not only one’s business, but ultimately, one’s social status and social aspirations. Professor Pieraccini provides an analysis of a select group of both private and public paintings that reveal the competitive and intricate world of"display" in Pompeii.Panel Discussion with all Presenters and written questions from the Audience.

Step back in time with a director of Pompeiian excavations, as Gary Devore explores how we continually re-imagine Romans through film. "Fall of the Roman Empire" (1964) uses Roman political decline to comment on then current politics and race relations in America. "Spartacus" (1960) is Kubrick's attempt to revitalize the left after the McCarthy era. "Gladiator" (2000) is a hyper-masculine answer to feminism's recent triumphs. Fellini's "Satyricon" (1968) riffs on how Mussolini (and others) ransacked ancient history. And then there's always "Monty Python's Life of Brian" (1979).

A Day in the Life of an Archaeologist at Pompeii
Stephanie Pearson (History of Art, UC Berkeley)
A Humanities Member-Led Forum
April 26, 2012, 6 pm
Commonwealth Club of California
595 Market Street, SF

We all know that archaeology in the real world does not closely resemble an Indiana Jones movie. But then what is it like? Understanding the archaeological process by which we gain knowledge about the ancient Roman world is as important as understanding the remains themselves; indeed, the process profoundly affects our interpretation of the ancient evidence. The steps involved in conducting an excavation are numerous but straightforward, and in this talk Ms. Pearson explains and illustrates a selection of them by drawing on her own experience working with the Via Consolare Project in Pompeii. From setting up a home base for the archaeological team, to acquiring the necessary supplies in a foreign country, to framing the goals and research questions, to excavating and processing artifacts, to closing up and preparing for next year - this is a day in the life of an archaeologist at Pompeii.

Destroyed by Vesuvius in 79 CE, the ruins of Pompeii offer the best evidence we have of life in the Roman Empire. In The Fires of Vesuvius, acclaimed historian Mary Beard explores what kind of town it was—more like Calcutta or the Costa del Sol?—and what it can tell us about "ordinary" life there. From sex to politics, food to religion, slavery to literacy, Beard offers us the big picture even as she takes us close enough to the past to smell the bad breath and see the intestinal tapeworms of the inhabitants of the lost city. She resurrects the Temple of Isis as a testament to ancient multiculturalism. At the Suburban Baths we go from communal bathing to hygiene to erotica.

From the author famous for his opening line "It was a dark and stormy night . . ." we will examine the classic Victorian tale of the last days of Pompeii, doomed city that lay at the feet of Mount Vesuvius. From poets to flower-girls, gladiators to Roman tribunes, here is a plausible story of their lives, their loves, and the tragic fate that awaited them.

May 9, 2012
5:30 to 6:30 pm
Board Room, Commonwealth Club of San Francisco
595 Market Street.
RSVP: commonwealthclub.org
Co-Sponsored by the Humanities Member-Led Forum
Free to Members of Commonwealth Club
$5 for non-members
Posted by Jo Berry at 13:44

Thanks for posting this, Jo! We think that the presentations were filmed and may be made available online later; if this is the case, I will post the link when it comes out.