Book: Pompeii's Ashes The Reception of the Cities Buried by Vesuvius in Literature, Music, and Drama

To be published in March: 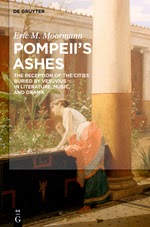 Although there are many works dealing with Pompeii and Herculaneum, none of them try to encompass the entire spectrum of material related to its reception in popular imagination. Pompeii’s Ashes surveys a broad variety of such works, ranging from travelogues between ca. 1740 and 2010 to 250 years of fiction, including stage works, music, and films. The first two chapters provide an in-depth analysis of the excavation history and an overview of the reflections of travelers. The six remaining chapters discuss several clearly-defined genres: historical novels with pagan tendencies, and those with Christians and Jews as protagonists, contemporary adventures, time traveling, mock manuscripts, and works dedicated to Vesuvius. “Pompeii’s Ashes” demonstrates how the eternal fascination with the oldest still-running archaeological projects in the world began, developed, and continue until now.

I From Treasure Hunting to Archaeological Dig. History of the Excavations of Herculaneum and Pompeii

II Travelers to the Vesuvian Cities

V Modern and Contemporary Visits to Pompeii in Fiction: A Perilous Affair

VII Real and Fictional Manuscripts from Pompeii and Herculaneum

VIII Pompeii on Stage and Screen

X Intimations of Pompeii: By Way of Envoy