From L'espresso (la Repubblica) today. It includes a note on the two (or 3) colapses over the past few days.

Because the large theatre is my research area I noted with interest the picture and the comment on mechanical excavators in the theatre. In fairness I have not seen nor have I had reports of diggers *in* the theatre, and the image that is being used is not recent (the rear walls of the however as the image shows work has gone on between the theatre and the quadraporticus.

When I say "work" what I mean is the loss of that area to access, my permisso this year explicitly forbade entry into this area, presumably as it is now a workshop/storage/greenroom servicing the large theatre and the temporary portacabins have been plumbed in, this area was considered too dangerous with things being moved around at the close of the theatre season. Given that I had permissions for the whole of VIII.7 and even the buildings currently undergoing work with the Sarno Canal redevelopment were not officially off limits, this was surprising. I include a newer image from September this year to clarify the situation. 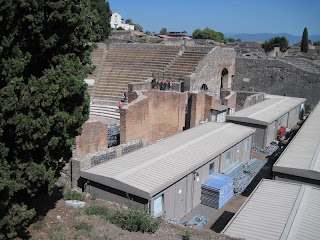