What Pompeian collapses mean to me & a simple shop at VIII.4.25 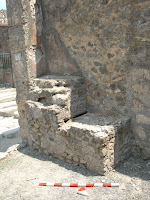 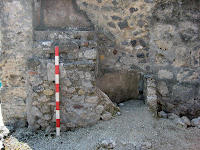 Over the past month I have been glued to reports of the sadly all too numerous collapses in Pompeii. Like anyone who researches aspects of the ancient world, I'm concerned about how this activity has and will change archaeology at Pompeii for both academics and the interested public.

This morning I discovered (albeit belatedly) that the shop at VIII.4.25, one of many included in my own research, suffered a collapse of its own some time ago. To some, this won't seem significant because the collapse damaged a set of shelves and basin. Before records were made the counter belonging to this shop disappeared, destroyed in antiquity or at the time of excavation, and the remaining display shelves were subject to part-reconstruction in modern times. In this case, based on my own photos from July 2006 (left photo) through June 2009 (right photo) and photos from Pompeii In Pictures, the collapse can be dated to post-September 2007 but pre-June 2009. The shelves remained partially collapsed at my last visit in June 2010. To me it seems important as an example of smaller features, not just walls, that are being lost.

I'm sure that responsible SANP staff and custodi noted the damage at VIII.4.25 on their never-ending list of properties requiring work. However, how many of these features will be destroyed without notice or without conservation funding until they are too far gone for repair? My point is that these smaller collapses happen every day and that they have the potential to become innumerable.

Andrew Wallace-Hadrill's recent comments were succinct and to the point that Pompeian archaeology suffers continuously from baking sun and soaking rain and underfunded repairs, that these are the causes of collapses at present, were in the past and will be in the future unless things drastically change at the site . For now, all I can do is to encourage others that non-invasive evaluation of the excavated archaeology at Pompeii (and other sites!) is better than further excavation which will ultimately destroy what hasn't yet been uncovered, and that it seems (to me) it is time for a large scale change to archaeological practice.

NB: It's been helpfully pointed out to me that some might misunderstand my own opinion on how best to proceed in future. To be clear, it is my concern that further excavation of the areas partially-excavated where the Nov-Dec 2010 collapses occurred not take place unless otherwise unavoidable. A number of current projects are re-considering what has be dug already through non-invasive methods and others are obtaining useful information in areas beneath excavated areas. Of course, not everyone will agree with my point of view, but that's where discussion can help us all to find the best result for Pompeii. Please do post your own views if you have them! (5.12.10)
Posted by Sera Baker at 15:12