Jeremy Hartnett and I were in Campania with the ICCS students a couple of weeks ago, and - thanks to Christian Biggi and Sarah Court of the Herculaneum Conservation Project, and to volunteers from Gruppo Archeologico Vesuviano (GAV) - we got to take the students to the Villa Sora (see Sarah's earlier post about the Villa). 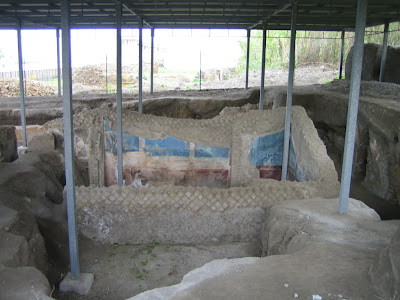 The Villa is right by the sea in Torre del Greco with views to Capri, and apparently was terraced over several levels. The small part that can be seen today was excavated in the 1990s and consists of a series of nicely-decorated rooms with lots of floral motifs that have been dated to the Tiberian period - although the decoration is clearly suffering from the elements, despite the roof put up after the excavations. 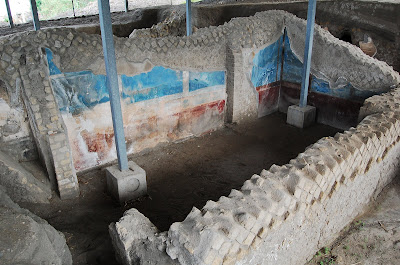 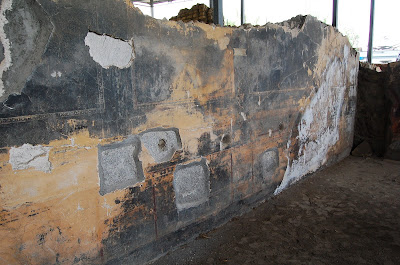 The villa is basically in a hole, located in the midst of a series of large greenhouses. The excavators were unable to excavate the parts of the villa nearer to the sea because train tracks pass by, cutting the villa in two. They can't excavate further inland, because the land owners won't permit it. So, the remains of the villa are isolated, and modern treasure-hunters have paid a visit. In the photo above you can see a ragged hole in the fresco in the top left corner - a small vignette was stolen from here. (The other more regular holes are from frescoes removed by the authorities.)
To visit the Villa Sora you need to book with GAV. Our coach was met by one of the GAV volunteers as we came off the autostrada and we were guided to the Villa. They have parking for cars, but there wasn't access for our coach which caused a few problems. We then had to walk through all the greenhouses to the villa, past a rather scarey series of chained dogs (I've never seen Jeremy run so fast!!) down to the villa. It was not an easy visit, honestly, but it was fun and I'm glad we did it. The two volunteers from GAV were fantastic; they couldn't have been more helpful and we had a great guided tour. I would recommend a visit - but not with a coach!
My thanks to ICCS students Staci Holloway and Elizabeth Salazar for providing the photos!
Posted by Jo Berry at 09:37