Short notice - I only just saw this - but definitely worth going to if you are in London on Saturday. Paul is a great speaker, and the BM exhibition next year is going to be awesome! 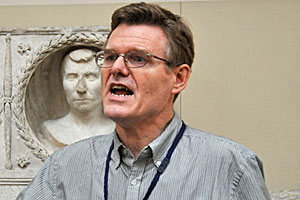 A day of lectures with Dr Paul Roberts preparing you for next year’s big exhibition at the British Museum.

Ticket: £40 (ticket price includes tea/coffee & biscuits in the afternoon and morning breaks, but does not include lunch).

The lecturer: Dr Paul Roberts is Curator of Roman Art and Archaeology at the British Museum, and Curator of next year’s Pompeii and Herculaneum – Life and Death in the Roman Empire exhibition at the British Museum. His research focuses on aspects of the daily life of the ordinary people of the Roman world. He has excavated in Italy, Greece, Libya and Turkey. He co-directs the excavations at Forum Novum, north of Rome.

At Home with the Romans: Domestic Life in Pompeii and Herculaneum.

Life and Death. Pompeii and Herculaneum. The Cities come to London.

Ancient Store Rooms, New Discoveries. Behind the Scenes and the Making of the Exhibition.

What to expect: In AD 79 two cities on the Bay of Naples in southern Italy were buried by a catastrophic eruption of Mount Vesuvius. Preserved deep under the ash the cities of Vesuvius and Herculaneum provide one of the most remarkable, immediate and moving glimpses of the Roman world. There are stately public buildings, such as theatres and baths, streets filled with shops and bars and houses of all shapes and sizes from luxurious mansions to flats above shops. Sculptures of emperors, gods and benefactors, inscriptions, electoral notices and graffiti filled the streets. In the houses were stunning mosaics and wall paintings showing everything from mythological scenes to still life, and sex, as well as jewellery, objects of silver, glass and even wooden furniture miraculously preserved. Most importantly there were the ordinary people of Pompeii and Herculaneum, their lives, their loves and their deaths on that fateful day in August AD79. Many of the beautiful (and ordinary) household objects from the cities will be brought to London for a major exhibition in 2013. As part of our study day we will also look at the exhibition itself, including new discoveries from Herculaneum, shown in London for the first time, and the world behind the scenes, putting together the exhibition.

See here for information about how to buy tickets.
Posted by Jo Berry at 12:22