My thanks to David Saunders of the Getty Villa for pointing out that there is now a discussion of the Apollo Saettante and the techniques used in its conservation on the Getty Villa blog:


Apollo’s Drapery: An Unfolding Puzzle
A new exhibition opening at the Getty Villa, Apollo from Pompeii: Investigating an Ancient Bronze, marks the completion of an 18-month conservation project that developed in collaboration with the Museo Archeologico Nazionale in Naples.

The exhibition presents the different aspects of a Roman bronze statue of Apollo as an archer—its discovery in Pompeii in 1817 and 1818; how it was made in antiquity; and how it was reassembled after it had been discovered—but also highlights the variety of approaches that were employed, both in the laboratory and the library, to examine these issues.

A conservator’s primary goal is to address any factors that are or could potentially be damaging to an object, and even before beginning work on the Apollo, we understood that the drapery hanging from its arms needed attention. It was clearly placing a significant strain on the figure, and we later discovered that its weight is around 80 pounds—almost as much as the rest of the statue. As the project developed and we studied these drapery ends in detail, we gleaned valuable insights about the restoration of the ancient statue after it had been unearthed. 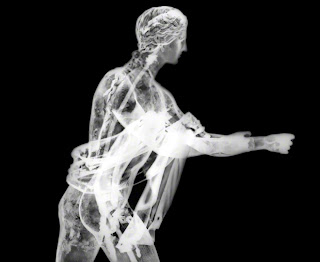 This is just one of the great photos that accompany a really interesting post.
Posted by Jo Berry at 22:48