A conference about shops, mainly in  Italy, will be held in the University of Chieti next 18th and 19th April 2013.

At least two papers about Pompeii:
And many others... Complete program available here.
Posted by Nicolas Monteix at 17:07
0 comments

Junk food and bling-bling: the British Museum exhibition for the readers of the Sun

Probably most of you already came across some of the latests articles by Mary Beard on the "Pompeii and Herculaneum" exhibition, this one was published by the Sun just a few days ago (23rd of March):


I reckon this piece as one further example of Beard's great communicative skills and, having a little experience myself on outreach and public archaeology, I think it successfully makes the wide audience interested in the ancient world (and makes us all talk about it as well!).

I was wondering though, whether the same result could be achieved for the same kind of public with less shiny lure baits or reducing the comparisons with the present cultures. Indeed the most interesting object mentioned in the article is, in my opinion, the statue of Pan making love to a goat. Parallels with that are hard to find these days, but probably they tell more about the ancient world. Can that aspect be explained in an engaging way to a broad public without underselling it? If you have any examples or experience to share, I would be grateful.
Posted by Unknown at 19:37
1 comments

A new exhibition on Pompeii will open in Bologna in 29 March 2013.

BBC Documentaries on Pompeii and Herculaneum

To coincide with the British Museum’s Life and death: Pompeii and Herculaneum exhibition, which opens this week, the BBC is showing two documentaries. The first entitled ‘Pompeii: The Mystery of the People Frozen in Time’ airs on BBC1 this evening at 21:00 is presented by Dr Margaret Mountford and offers a fresh look at the Pompeian victims of the AD79 eruption of Mount Vesuvius.  In the second programme, entitled ‘The Other Pompeii: Life and Death in Herculaneum’ (airing next Monday at 21:10), Prof. Andrew Wallace-Hadrill tells the story of Herculaneum’s victims and also provides an insight into the recent work at the site carried out by the Herculaneum Conservation Project.  Further details can be found on the links below.

L’Ecole française de Rome has the pleasure to inform you of the forthcoming publication of: 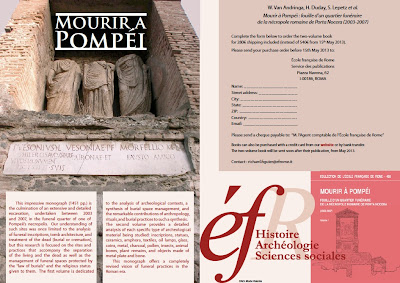 Lectures at the BM

For those of you who have not seen it yet--The British Museum is hosting a number of lectures/events related to the Pompeii and Herc exhibit.

Here's a list of the forthcoming events as the Museum of Naples:

Old photographs of Regions I.1, I.2, I.3, I.5, VI.9.1, Porta Stabia, and the Tombs in front of Porta Stabia have been added from the Tatiana Warscher volumes held in the DAI Rome:-

The site has new drop down menus that expand automatically to show further links. Long time users will notice the return of the previous, next, up and home buttons in all versions of the site.


all the best
Jackie and Bob at pompeiiinpictures


Posted by Jackie and Bob at pompeiiinpictures at 12:28
0 comments

See this link for an interview in Italian with the authors of "Ercolano, colori da una città sepolta".

Life and Death in Pompeii: The Telegraph news coverage

A round-up of the most recent Telegraph news stories in advance of the upcoming British Museum exhibition Life and Death in Pompeii as well as a free iBook!

Next weekend, March 8th-9th, the British School at Rome will host the international conference "Fuel and Fire in the Ancient Roman World", organised by Robyn Veal and Victoria Leitch.

Please find below the complete program and the abstracts of the three talks on fuel in Pompeii.

Fuel and Fire in the Ancient Roman World

This paper aims to provide some insights on the role played by fuel (both wood and agricultural waste) in the economy of Roman cities and their countryside. In particular, it investigates whether villas and cities of ancient southern Campania were self-sufficient in the provision of fuel required for their daily needs.
Buried by two eruptions in AD 79 and 472, the environs of Vesuvius provide high-resolution data – extant remains of ploughing furrows, trees in quincunx formation, and piles of olive pomace – which are here used to create a comprehensive picture of land exploitation. The idea of a self-sufficient villa as promoted by ancient authors is tested against the archaeological record, i.e. the actual size of the estates and the percentage devoted to vineyards, orchards, and wood in them. Furthermore, in order to understand whether the tree species commonly used as fuel were a local or an imported resource, charcoal assemblages are compared with the carbonised leaves found in the volcanic ashes.
In the last part, the paper focuses on the problem of interdependency between city and countryside, Vesuvian plains and the Apennines.

Commercialisation of the Night in Ancient Pompeii
David Griffiths
The uniquely human activity of consuming artificial light has received little attention in studies of pre-industrial societies. The Roman period witnessed significant levels of urbanisation and economic growth, consuming light on a scale never seen before. This paper forms part of a broader study assessing the social and economic significance of the consumption of artificial light, testing the hypothesis that a reliable and affordable supply of fuel and lighting equipment was a major constituent in Roman urban living. In the ancient world, the cost of food (for the majority) as a relative proportion of personal expenditure was substantial; the consumption of foodstuffs for non-dietary requirements had significant social and economic implications.
This paper focuses on the commercialisation of the night at Pompeii, addressing four aspects of the economy directly related to nocturnal activities:

Nocturnal activities are structured by access to artificial light; it changes the lives of people, effecting behaviour and perceptions of objects, space and time. The cultural choice to use food (e.g. olive oil and animal fats) as lamp fuel suggests a desire or necessity to extend the day, influencing architectural proportions, decoration, and the organisation and use of space. The ability to continue human activity, especially in a commercial setting, once the sun has set, depends on access to artificial light. It extends the working day, increasing income potential without the need for structural expansion. The dynamic nature of the ancient city had a significant number of opportunities for financial transactions, providing a focus for local and regional populations to trade and exchange goods and services. Economic activity continued once the sun had set, facilitated by the provision of artificial light through oil lamps, torches, lanterns, and fire baskets. Extension of the day for commercial activity, especially to maximise the financial benefits of market days or religious festivals, must have generated enough income to outweigh the cost of lamp fuel and lighting equipment.
The commercialisation of the night was only possible through an affordable and reliable supply of lamp fuel and lighting equipment, facilitating the desire of the inhabitants of Roman towns to extend the day, whether for domestic, commercial, leisure, or religious activities.

For the last five years, an archaeological research program has been interested in excavating and studying the thirty-seven known bakeries in Pompeii, would they be for a domestic or a commercial production. In three of them (I 12, 1‑2; VII 1, 25.46‑47; IX 3, 19‑20), stratigraphical excavations were performed, allowing to understand the evolution of these productive units. Systematic sampling was carried out in three bakeries, especially in the milling rooms, on soil levels in use while bread was produced, and nearby the ovens, for a total amount of 1.3 tons of sediment. During sieving and sorting, lots of carbonised olive stones (99% of the plant remains) and charcoal fragments were recovered. Heaps of olive stones and stone fragments were also found in rubbish pits, just beneath the ovens, in bakeries I 12, 1‑2 and VII 1, 25-46‑47. Among the wide wood spectrum reconstructed from charcoal analysis, beech (Fagus sylvatica) appears predominant.
The analysis of those fuel remnants allows us to understand and to specify the way that bread ovens were running in the 1st century CE Pompeii but raises also many questions whose answers should help in revisiting links between an urban centre such as Pompeii and its hinterland. Was the use of olive oil extraction refuses a common way to get cheap and easy-to-obtain fuel for bakeries, or an adaptation to peculiar circumstances (e.g. wood shortage), or even a technical prerequisite? How was the fuel supply organized? Is it possible to trace an evolution in fuel collecting practises or to highlight differences between domestic and public settings in the city of Pompeii?