News just in that Pompeii, Herculaneum, Oplontis, Stabiae and the Boscoreale museum may be closed tomorrow morning from 8.30 - 10.30 due to a union meeting.
Posted by Jo Berry at 14:17
0 comments

From ANSA, news of potential investment outside the walls of Pompeii. Although it would certainly be nice to improve modern Pompei, it's the ancient site that needs the help desperately ...

This article is in today's Corriere del Mezzogiorno, is all about the condition of the toilets at Pompeii!

The Soprintendenza has issued a press release saying that the article exaggerates the problem and that the overflowing water was immediately dealt with.
Posted by Jo Berry at 12:44
0 comments

Apartment for rent - summer 2012 - good for groups in Vesuvian area

If anyone is looking for accommodation over the summer in the Vesuvian area so that a group can carry out research or fieldwork, this might be of interest: 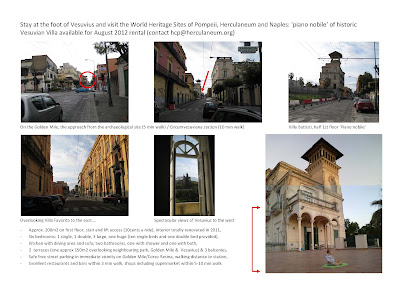 For more information contact hcp[at]herculaneum.org
Posted by Sarah at 10:50
0 comments


See Vesuvius superimposed on your hometown (or anywhere else!). Or the Colosseum, or the Great Wall of China, or a bunch of other options. This is pretty cool.

If Mount Vesuvius was found at ...
Mount Vesuvius is a volcano measuring around 1280 meters high with a crater diameter of roughly 700m.
Posted by Jo Berry at 09:28
0 comments

Only 2 days left to take advantage of the big discounts offered by (expensive) Italian publisher l'Erma di Bretschneider. Pompeii and Vesuvian publications on offer here.
Posted by Sarah at 14:29
0 comments

Back in March there were claims that asbestos had been deliberately buried under lapilli at Pompeii. The asbestos issue is now back in the news. The police are investigating claims that employees working in the pre-fabricated offices of the Soprintendenza were exposed to asbestos. The Soprintendente has denied that the health of any employees were put at risk.

And this one is way out there. An inscription found in Molise records a dedication to the domestic lares after the safe return of Rectina. This has been linked to the Rectina who appears in Pliny's letters:

In Scientific American, an article about the victims of Vesuvius (and the victims of Martinque in 1903), useful for students, perhaps. I particularly like the embedded History Teacher's video - kinda out of place, but still good!

This one a few days old, from TorreSette.it - criticisms of the state of affairs at Oplontis, but nothing new or different.

Stabiae in the news today

Basically, Bobbio, the major, is criticizing both the current condition of the villas at Stabia and the fact that the area around them is being built up (he blames the Soprintendenza for this - but surely it's an issue for the local government? I can't say I understand the local regs, though). He visited the villas on Sunday as part of a local SalvArte initiative.
Posted by Jo Berry at 10:45
0 comments

Cultural Heritage and Human Development on the Dark Side of Vesuvius

In order to find ways to contribute to the human development of Campania while better caring for the archaeological heritage, the Apolline Project recently hosted Alexander Smithers, a Masters student of Cultural Heritage and International Development currently at the University of East Anglia under the supervision of Dr Akira Matsuda. Research carried out during this visit will form the basis of a management plan intended to further these goals. As the Apolline Project aspires to be as open as possible, we asked him to write a few pages on his findings so far which we have now posted on our website. We have done this in order to stimulate discussion in the area of public archaeology and how it intersects with development issues. We hope that we can start a debate on these pages in response to this, considering the valuable contributions made in this field by many scholars to Blogging Pompeii.
http://www.apollineproject.org/cultural-heritage.html

A synthesis about the Pompeian situation, from Le Monde.fr:

There will be a Herculaneum paper ("Interpretation and sustainability: supporting Herculaneum’s conservation") at the Interpret Europe conference on Monday for anyone interested and in the Pisa area...

Regulations on Leading Tours in Pompeii?

To the Blogging Pompeii community: I would be ever so grateful to hear from some of you who are in the know about the rules for leading tours in Pompeii. I am interested in leading a tour of a dozen or so folks through the site (next year), but wonder about the legality of such an endeavor — especially considering the power of the tour guides' union! Has anyone had experience with either applying for a tour permit of some sort, or definitively discovering that paperwork is not necessary for this (either formally or "they just didn't seem to mind that I was leading a tour")? If so, what were the general circumstances of your tour (group size, academic affiliation, peak tourist season or off-peak, paying or non-paying customers, what year it was, etc.)? I would appreciate any information you have on the subject.

With warm thanks,
Stephanie Pearson
UC Berkeley
Posted by steph.kelley at 18:49
5 comments

From Napoli.com, news that the Bronze Age village at Nola is to be reburied. The prehistoric village at Poggiomarino was reburied earlier this year. Sad news, but given the lack of funds for conservation and the fact that the site is currently flooded it's probably the right decision.

Quick reminder for those planning to be in Pompeii or any of the other sites this summer - please add your field work dates to the Pompeiana.org calendar! Thank you!
Posted by Jo Berry at 14:57
0 comments

In the Times Literary Supplement, Mary Beard reviews the following:


Walk like a Roman
When the ancient geographer Strabo described the native inhabitants of the Iberian Peninsula, he listed – with a predictable combination of relish, horror and exaggeration – all kinds of aspects of their weird barbarity. Some of the Spanish tribesmen, he insisted, stored vintage urine in cisterns and then bathed in it, or used it to clean their teeth. Others dressed their women up with iron rods around their necks rather than jewellery. Others, still stranger, appeared to have no gods.
No less remarkable, for Strabo, was the bafflement some of these poor Spaniards felt at the day-to-day habits of their new Roman allies or conquerors. One group of tribesmen, he explained, visiting a Roman camp and seeing some generals taking a stroll, “walking up and down the road”, thought they were “mad and tried to take them back into their tents”, either to sit down and rest, or get up and fight. Despite Strabo’s patronizing tone, it’s one of those rare occasions where we can catch a glimpse of the barbarian point of view on the Romans. The Spaniards presumably thought that walking was something that got a person from A to B (or from tent to battleground). What on earth then were these Roman generals doing as they ambled around, chatting, but not actually going anywhere?
In Walking in Roman Culture, Timothy M. O’Sullivan eloquently explains that how and why a person walked were crucial cultural indicators in ancient Rome: ways of walking divided barbarians from Romans, and good Romans from bad. If this aspect of Roman culture has not often bulked large in modern studies of the ancient world, that is partly because – as O’Sullivan notes – we have chosen not to recognize it, or have even actively “translated it away”. The key Latin word is incessus, which literally means “gait” or “how a person moves on their feet”. It is now regularly translated as “bearing” or “demeanour”; but that removes all the sense of movement from it. “He has a noble bearing” may seem to us a more “natural” thing to say than “He has a noble way of walking”. It is not often what the Romans said, wrote or meant. In ancient Rome how you walked was a sign of who you were. Quite simply, it could be an indication of paternity. When people wondered whether Cleopatra’s child, young Caesarion, really was the son of Julius Caesar, they pointed to his walk (incessus) as much as to his facial features. Gait ran in families. Think, for example, how often those Roman family names (often derived – like Crassus, “Fatty”, or Rufus, “Redhead” – from physical characteristics) referred to feet or to odd ways of walking: Plautus, “flat-footed”; Valgus, “bow-legged”; Varus, “knock-kneed”. As O’Sullivan observes, “‘a family gait’ was no less distinctive than ‘a family nose’”.

The latest Oebalus is now out and can be purchased from Bardi Editore.

For those who missed last night's British School at Rome event (the Herculaneum Conservation Project team presented the discovery and reconstruction of a Roman timber roof and its decorated ceiling), you can get a glimpse of Herculaneum's latest treasure in the Sole 24 Ore newspaper. 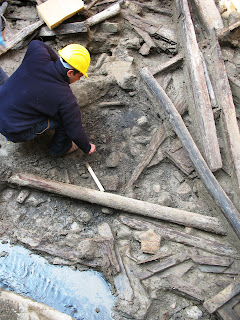 Quick question for a Friday afternoon!  Does anyone know of any Doric entablatures at Pompeii in a domestic context?  In situ or otherwise...

Hope you can help!

For anyone in the Rome area on Monday, please come to a presentation by the Herculaneum Conservation Project at the British School at Rome (18.00, Via Gramsci 61).

The Telephus Roof Project: considerazioni preliminari sul rinvenimento di un tetto di legno ad Ercolano
The team will describe the discovery of a unique Roman timber roof found on Herculaneum's ancient shoreline where it had collapsed down from the House of the Telephus Relief in the AD79 eruption. The roof covered the house's so-called Marble Room and the presentation summarizes research on the roof structure and its decorated ceiling. The presentation will be in Italian but the presentation will be richly illustrated with the very exciting visual results of the Telephus Roof Project. 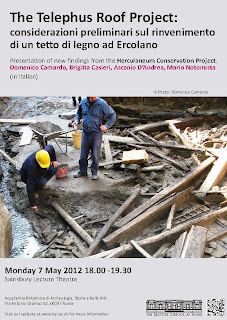