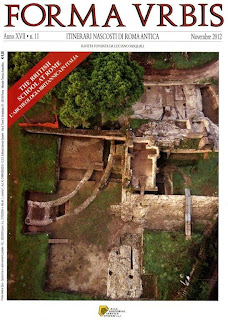 The November 2012 issue of Forma Urbis magazine was dedicated to the work and research of the British School at Rome (BSR).

The Herculaneum Conservation Project featured heavily with an extensive and beautifully illustrated article by Sarah Court and Domenico Camardo.

Also in this edition there was a piece by Sophie Hay outlining the archaeological geophysical survey the BSR conducted in Pompeii in collaboration with Steven Ellis and Eric Poehler.

We hope to be able to post the articles as soon as we have permission.
Posted by Sophie Hay at 01:50
0 comments

The Chronique des fouilles, which was formerly included in the MEFRA is now on line.
Just issued, 2011 campaigns interim reports about :

Posted by Nicolas Monteix at 17:48
0 comments

Are you planning to visit the Vesuvian sites or other stunning localities in Southern Italy in the near future? Well we have just the perfect website for you then! Thanks to an MoU between the Association Angeli per Viaggiatori, 10 associations including the Associazione Herculaneum, the University of Naples Federico II and thanks, also to a little funding from Fondazione con il Sud we have launched an initiative called 'Benvenuti al Sud' ("Welcome to the South"). The primary objective is to create a web-based social network that supports a sustainable form of tourism in southern Italy. Basically when you travel to a new city it is fun to be guided by local people or to receive suggestions from locals on special places to visit, where to eat and what events are on. It's all about discovering new places that are off the beaten track, making new friends and getting a welcoming that no organized tourism can match! Angels for Travellers is a community of people (Angels) who are willing to help other people (Travellers) planning to visit their hometown. This service is totally free of charge. All a potential visitor needs to do is register on the website www.angelsfortravellers.com and ask an Angel for help in planning his/her next trip.

Posted by Christian Biggi at 11:50
0 comments

In November UNESCO and the Italian Ministry of Culture held a meeting in Pompeii to discuss issues related to the site's management and conservation in light of the problems facing the ancient city and the new "Grande Progetto Pompei" financed by the European Union. The results of this first meeting have been published on the UNESCO website.


The First Expert/Stakeholder Meeting took place in Pompei (Italy) on 17 November 2012, within the framework of the project “Towards a governance system for coordinating the updating and the implementation of the Management Plan of the Archaeological Areas of Pompei, Herculaneum and Torre Annunziata”. The meeting was funded by the Italian Government and managed by the UNESCO World Heritage Centre in collaboration with the Italian Ministry of Cultural Heritage and Activities (MIBAC).
The objective of the meeting was to assist those responsible for the World Heritage property “Archaeological Areas of Pompei, Herculaneum and Torre Annunziata” in updating and reviewing the existing management plan to address public use and disaster risk management issues and include provisions to regulate and control development in the vicinity of the property.
Around 50 participants included local, national and international experts in the field of archaeology, sustainable tourism, economics of culture, management, conservation, disaster risk management; national and local authorities, local stakeholders and site managers. The Italian Ministry (MIBAC) was represented at the highest level and by all central and decentralized departments and units involved in the preservation and enhancement of the World Heritage site. Experts from ICCROM and ICOMOS, two of the advisory bodies of the World Heritage Convention, also contributed to the discussions.
The Meeting was opened with an introduction on the core elements of the project agreed between UNESCO and MIBAC, followed by a presentation on conservation and maintenance aspects that are included in the Grande Progetto Pompei financed by the European Union. The activities put in place by the MIBAC-UNESCO office were listed with a particular reference to the World Heritage site of Pompei, Herculaneum and Torre Annunziata. The meeting‘s objectives were described and the draft proposal for a new management system for the World Heritage site was introduced.
The state of the World Heritage site was then illustrated in term of conservation, preservation, maintenance, planning and management issues completed by the emergency plan for the Vesuvian area. An example for future heritage management practices was identified in the Herculaneum Conservation Project, a public and private initiative acting at one of the archaeological area of the World Heritage site. The new Italian guidelines for sponsorship were also explained. The discussions followed then in the four workshops on heritage and conservation, disaster risk management, public use and governance, institutional and organizational settings; and resulted in several considerations and suggestions (attached).

For downloads and more see the UNESCO website.
Posted by Sarah at 10:15
0 comments

I wonder if anyone would be kind enough to point me in the direction of or share a copy of the following article. Unfortunately, the library at the University of Nottingham as not been able to obtain a copy of this article since August 2012.


All the best,
Sera

Our friends over at Save Rome have asked us to sign this petition:

The site of the "Gladiator tomb" is one of overwhelming cultural and historic value not only for Italy but for all of humanity. Given the response from the academic world and public enthusiasm since its discovery in 2008 for the incredible level of preservation of the site, quality of the tombs and section of Via Flaminia road, and identification of Marcus Nonius Macrinus' mausoleum (readily linked in the press with Russell Crowe's Maximus Gladiator character from Ridley Scott's Gladiator), we believe that the study of site should continue and the site should not be abandoned nor reburied.
Currently, the funding of cultural heritage in Italy (and the world) is, indeed, lamentably lacking, but the "Gladiator tomb" site is exactly the sort of discovery that serves to remind us we need to support heritage sites beyond the initial excavation, discovery, and study. And few discoveries around world have struck a chord with such a large worldwide audience. Conservation of the site merits further attention and discussion on costs and overall plans for the site should be open for further discussion.

We, the undersigned archaeologists, scholars, scientists, and members of the general public from all over the world now join with an increasingly large number of Italian citizens to raise our voices in protest against the covering of this unique site and we advocate a forum to discuss alternative solutions. 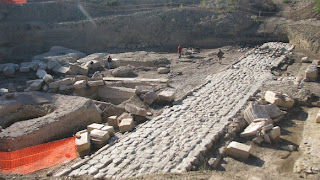 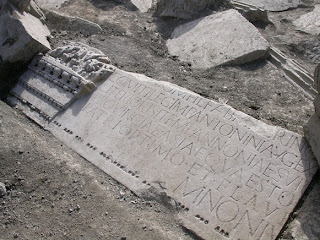 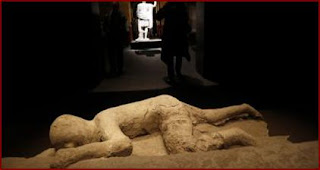 BBC4 Documentary: The Dark Ages: An Age of Light

Interesting documentary that aired on the BBC last week, exploring early Christian art, starts with a fun discussion of the 'Rotas/Sator' squares found at Pompeii. 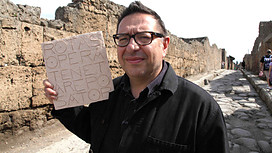 Pedar Foss has a new project to translate and comment on Pliny's letters about the eruption of Vesuvius. It's all happening on-line - Pedar is blogging his translation and commentary, and aiming to add one post each week. Check it out here. It's for Latin teachers and students, as well as academics. And you can leave comments.
Posted by Jo Berry at 10:36
0 comments

This one, from Il Mattino, is a week old, I'm afraid. But sad news all the same.

From the SANP Press office:

Various newspaper articles have been published over the weekend about this collapse. This one is in English. 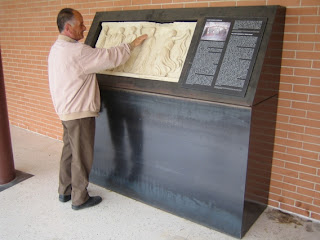 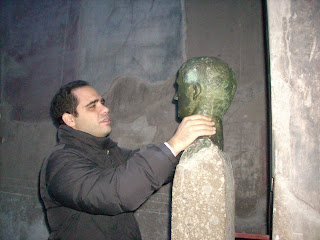 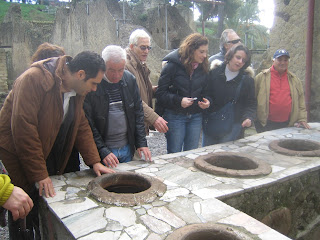 Dear all,
You've probably noticed that there haven't been many posts from me recently. I am swamped with other stuff, and unfortunately Blogging Pompeii is suffering as a result.

Please, please, if you notice a relevant news article, publication, press release, or you have news of some kind or other, consider posting it yourself to the blog. Don't send it to me to post, I may not be able to do it as soon as you would like!

I'd like to thank you all for supporting Blogging Pompeii since it started. We've created a great community here. But for the near future at least I need some help to keep it going.

I have also just been looking again at the King's Visualisation Lab after a long gap. There are four Projects that relate directly to Pompeii and nearby. The images seem small by recent standards, but they are certainly worth a look. There are links to some further material and to other Projects of theirs, including Colchester and several aspects of drama.