Do you use The Complete Pompeii as a coursebook? 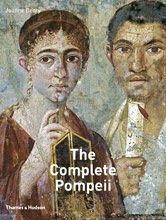 I am a bit embarrassed to be asking this, but it would be useful for me to know any of you use my book, The Complete Pompeii, as a coursebook in any of the teaching you do (if you want to know why, email me and I will explain!). If you do use it, please would you take the following survey, which has just three questions:

Hello,My name is Beth Morris and I'm currently a third year student at the University of Lincoln (UK) studying International Tourism Management.For my final years dissertation I am studying the theory of dark tourism by looking into visitor motives to the site of Pompeii.After studying A level classics I fell in love with the ancient world and I have a great interest in Pompeii, hence the reason for my dissertation topic.In order for me to collect primary research into visitor motives, I have created a survey aimed at people who have visited Pompeii. I was hoping I'd be able to share a link to the survey on the blogging Pompeii site and possibly the Facebook site in order to attract the attention of others who have an interest in Pompeii.It would be hugely appreciated and I'm very interested in hearing the responses.Thank you and kind regards,Beth MorrisInternational Tourism Management student.Follow the link below to the survey.https://qtrial2015az1.az1.qualtrics.com/SE/?SID=SV_8lccjNleusDMfl3
Posted by Jo Berry at 10:57
0 comments

Call for Participants - Be part of the Apolline Project

Call for participants – Summer fieldwork opportunities in Pompeii and on the slopes of Mt. Vesuvius.

The Apolline Project is an open research network, which sheds light on the hitherto neglected past of the area to the north of Mt. Vesuvius, in the Bay of Naples. The project has run actively since 2004 and has several components, with current major work focusing on a Medieval church, a Roman villa with baths buried by the volcanoclastic debris of Vesuvius, and the Suburban Baths in Pompeii.

The Apolline Project is now accepting applications for its summer 2015 field season.

We would be very grateful if professors would be so kind as to forward this message to the relevant university mailing lists and to students who might be interested in participating.

If your institution is interested in joining the research network, please send us a message at info@apollineproject.org.

News last week that the new Herculaneum Museum financed by David Packard has been given the go-ahead:

Already there have been objections to the plan, based on the fact that there is already a museum on site at Herculaneum that has never been used (today it houses the offices of the site administration) - although, as I understand it, the whole issue is much more complicated than the journalists imply:

Discovering the Gardens of Pompeii: Memoirs of a Garden Archaeologist: Wilhelmina F. Jashemski


Discovering the Gardens of Pompeii: Memoirs of a Garden Archaeologist: Wilhelmina F. Jashemski

We have recently acquired a copy of the new book  “Discovering the Gardens of Pompeii: Memoirs of a Garden Archaeologist: Wilhelmina F. Jashemski". What a beautiful addition to the bookshelf.
This new book has 336 pages and contains 400 of Stanley’s original photographs.  It is available from your local Amazon in the USA, UK, France or Italy, in colour for the local equivalent of US$40, about GBP 17.31, Eur 35.99 or in a black and white edition for US$20.

It uses the Create Space Independent Publishing Platform a low cost print on demand option which you may find of use for your own work in the future.

In addition to the gardens of Pompeii are her memories of her trips all over Europe and wherever there might be a roman garden, from her home in America starting from 1955 until 2004. These memoirs will take the reader on a journey to Pompeii and across Europe, France, Switzerland, Italy, Austria, Germany, Poland, and Greece alongside Wilhelmina and Stanley.


She had the idea of trying to prove what plants would have been in roman gardens, and write a book on the gardens of the Roman Empire, of which a chapter would be on Pompeii. She told Tatiana Warscher this when she first met her, and that she thought that all the gardens of Pompeii would have already been published. She remembered vividly the tart reply “Only the picture postcard stuff”. Tatiana looked her straight in the eye and said “My dear girl; your first book will be on the gardens of Pompeii”. Tatiana Warscher had been given her own key to all the Pompeii houses, so they were able to go anywhere they wanted, just by unlocking the gate of any house and gaining access. [Oh, what a boon!]. As they worked together day after day studying house after house, garden after garden, large and small and with many features, she began to realise the truth of what Mrs Warscher was telling her, and the single chapter became the three large volumes on Pompeii for which she is famous.
There are many stories and anecdotes in the book which the reader will find very amusing.  Her memories of Pompeii in the late 1950’s and 60’s brought back happy memories for Jackie, of when she first visited there in 1967 and 1968. Life seemed much simpler then, and it shows in the photos, roads with only a few cars, houses without all the modern day trappings – just the necessities, and happy friendly faces at work on the excavations. Faces that became Wilhelmina’s friends, and looked after her, even after Stanley died which left her devastated. Without their friendship, she probably wouldn’t have been able to carry on with what became her lifetime’s work, and a boon to all archaeologists, gardeners, and of course, anyone just interested in the area of Pompeii and surrounds.


This book will be a positive read for anyone interested In Pompeii, gardens, history and roman archaeology, and at the same time being an inspiration for those with an idea to just get out there and make it happen. Her itinerary of the days spent in the area are detailed and informative recording the visits, excavations, the publishing of the books and the many people involved along the way.
This book is a lasting tribute to Wilhelmina, her husband, her colleagues and friends, and her very interesting life. It has been made possible by the tireless work of her friend Clopper Almon.  He visited Wilhelmina regularly in the years just before she died, and collaborated closely with her to finish her memoirs for publication. After her death, he has now kept her wish for greater access to the memoirs and photographs by publishing this book, and making sure the photographs are well looked after, documented and accessible.


We are also honoured to have been given permission to include Stanley’s Pompeii photos on pompeiiinpictures. We have started to sort them out into the Pompeii addresses, and eventually they will be a lasting remembrance both of Stanley and Wilhelmina and the friends she knew at the Scavi, and of course, Wilhelmina’s friend and mentor, Tatiana Warscher.
The University of Maryland Library has the 18,000 photos and Wilhelmina’s papers and a visit to study this special collection (with this book at your side) will really do them justice.  Wilhelmina F. Jashemski Papers on UMD site

The following has just been published in the journal Nature Communications and can be read on-line:

There is also an article on the BBC website about this.
Posted by Jo Berry at 09:21
0 comments

Rather intriguing news article in Il Mattino regarding the area beyond the Porta di Stabia. Anyone know anything more about this? 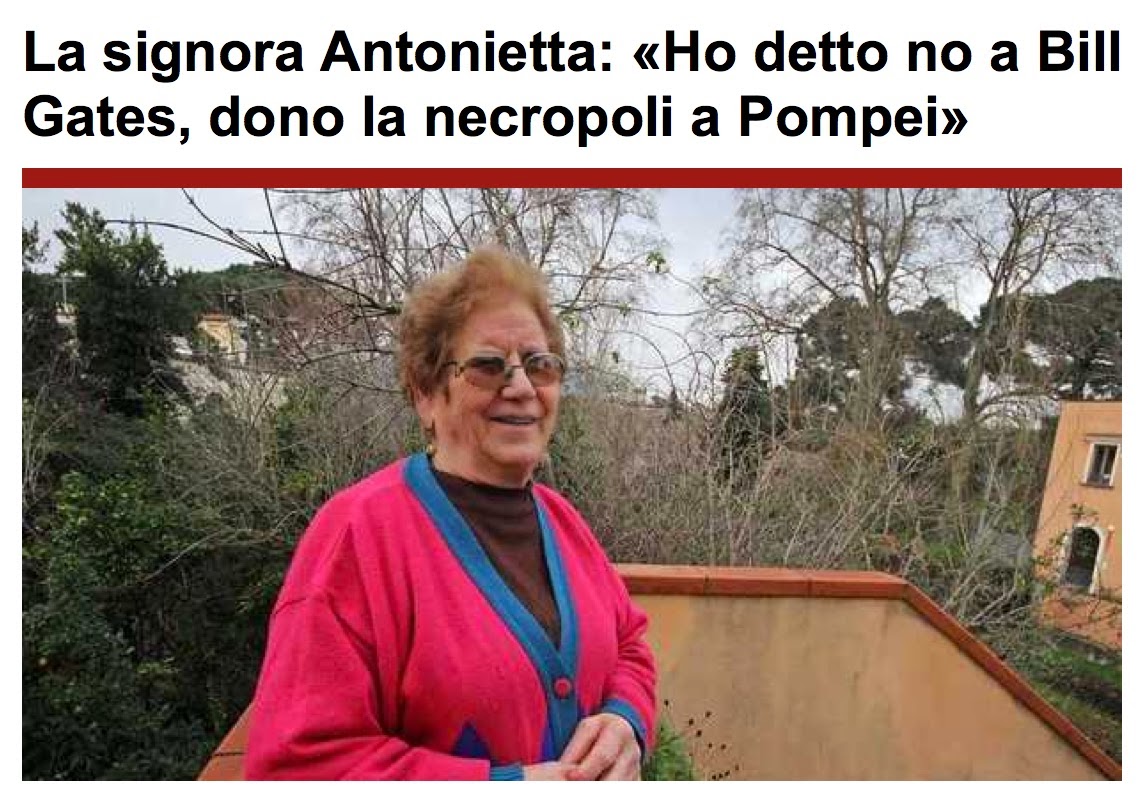 Posted by Virginia Campbell at 13:24
1 comments 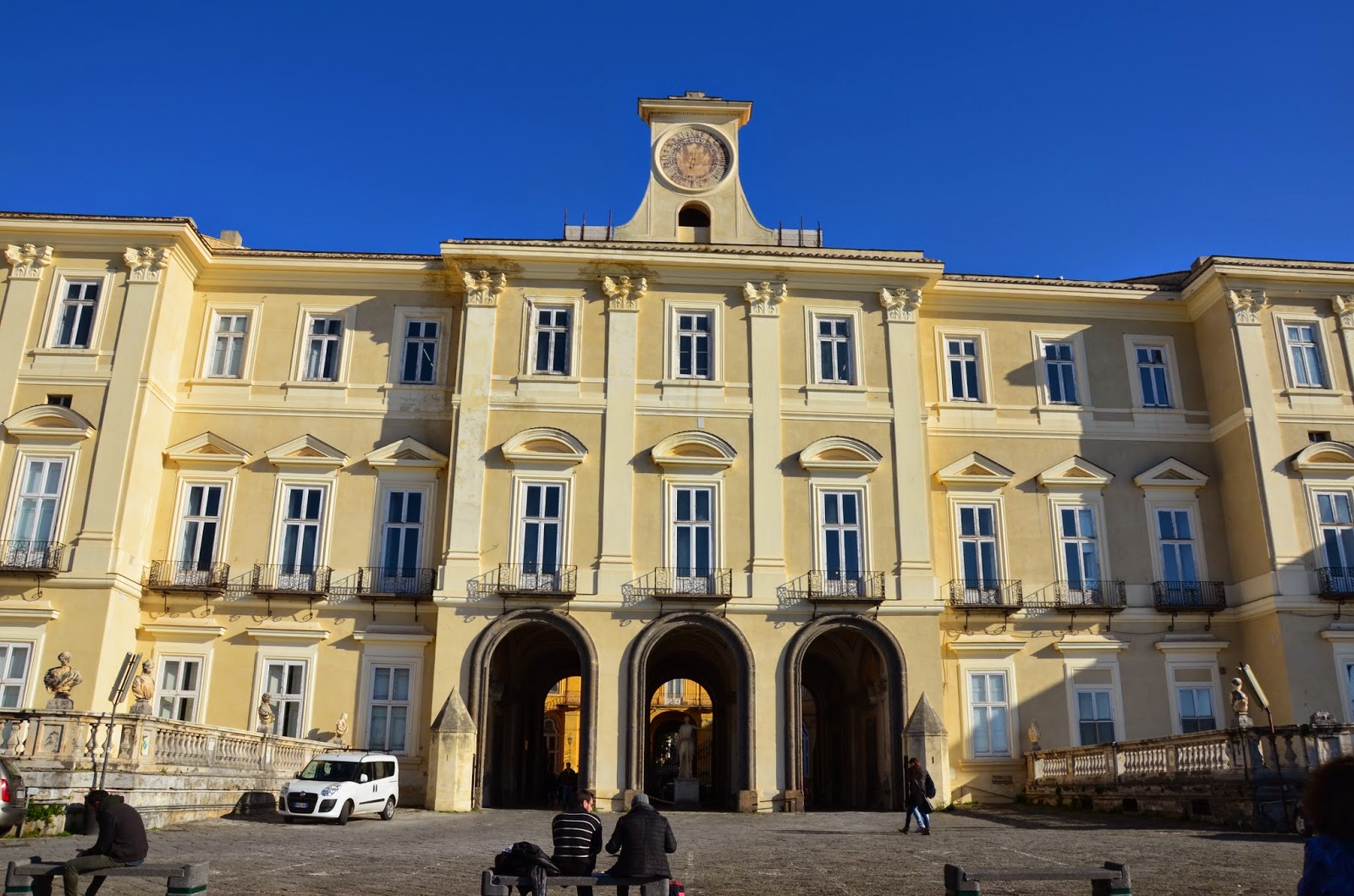 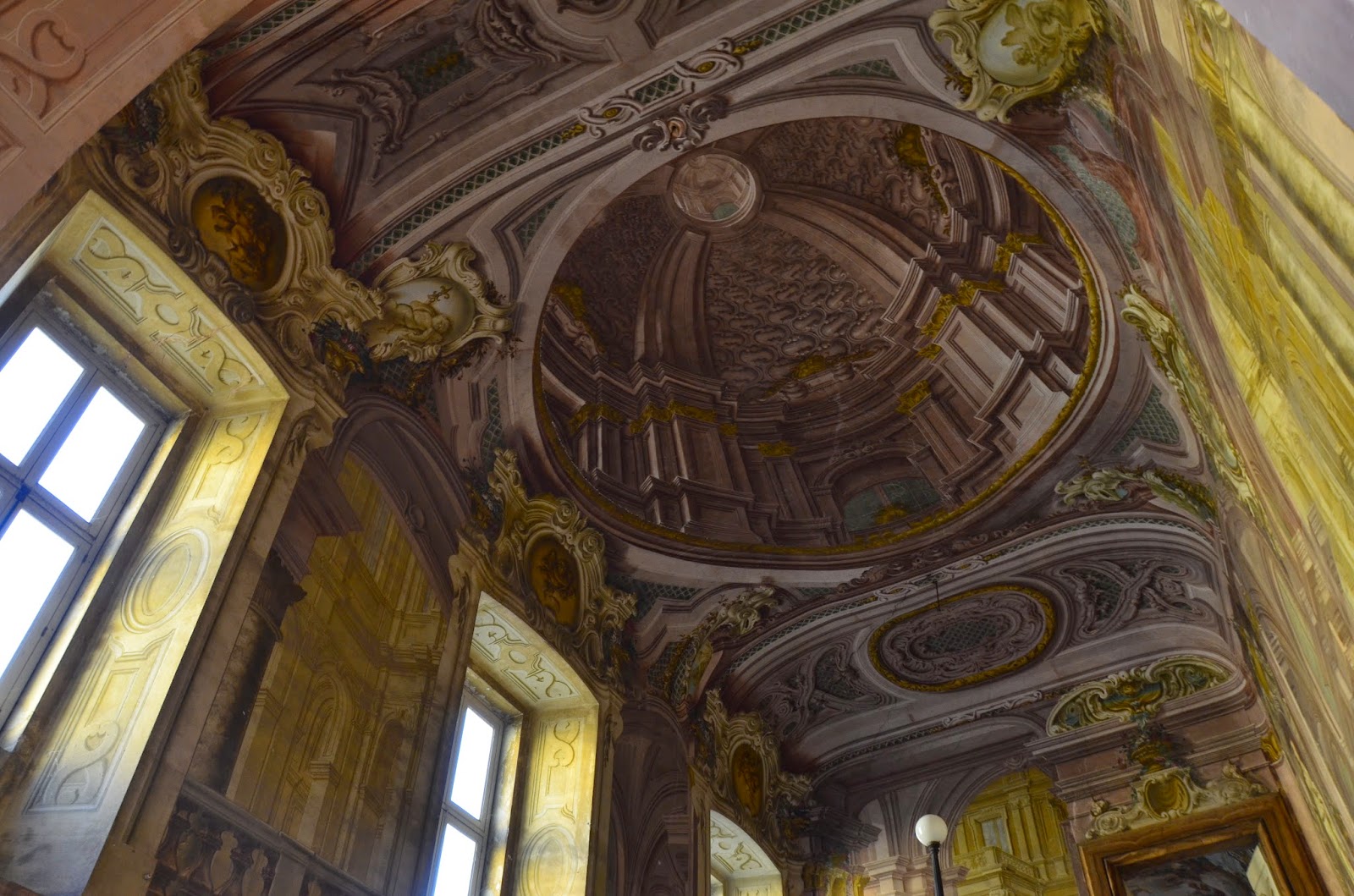 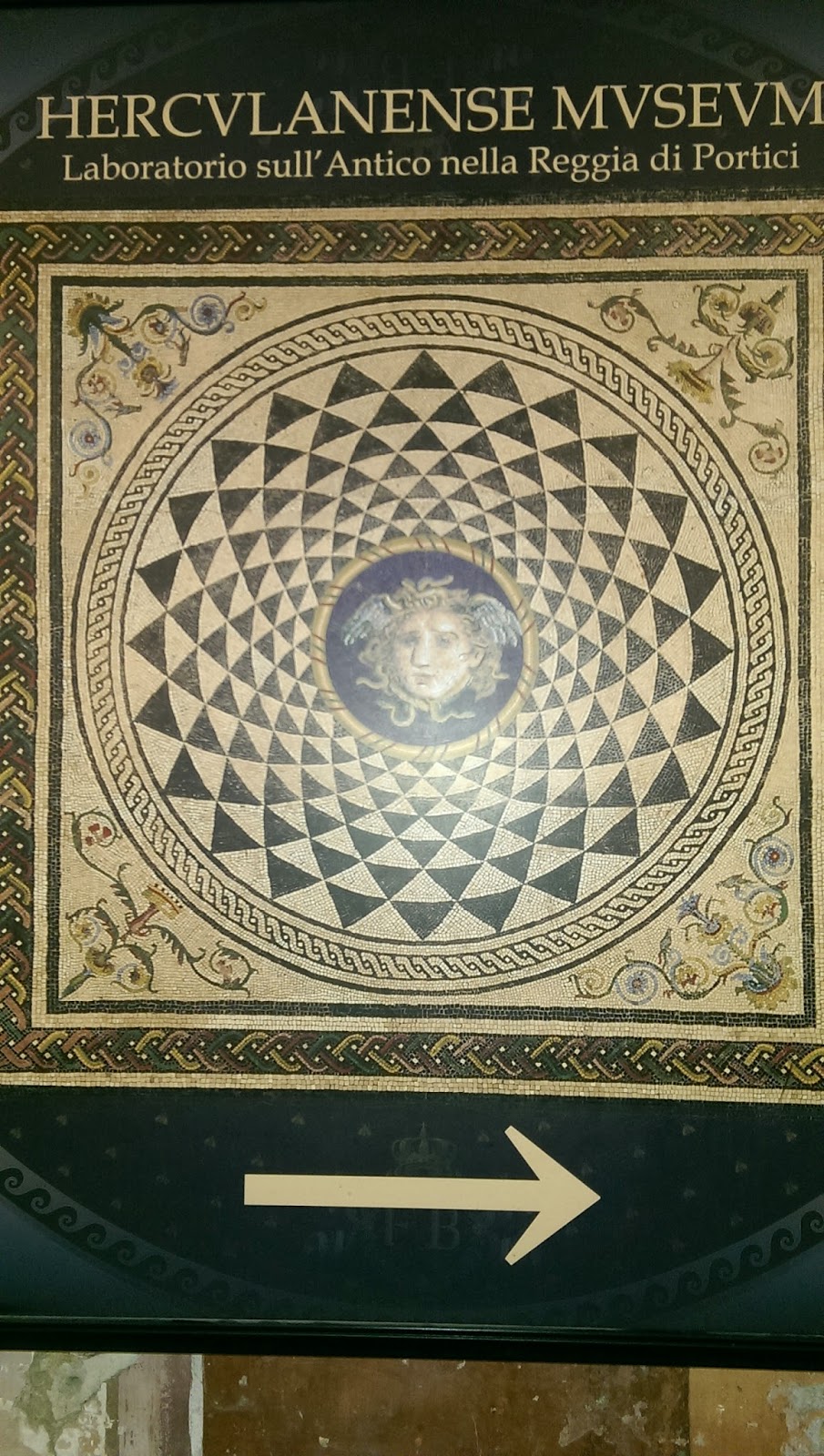 Article on Pompeii in January 2015 AJA

I didn't see this posted on Blogging Pompeii yet, but forgive me if I missed an update. I was excited to see that Elisabetta Cova has an article in the most recent AJA, with an image gallery on-line. The title is: "Stasis and Change in Roman Domestic Space: The Alae of Pompeii's Regio VI"http://www.ajaonline.org/article/1941
Happy new year to all!
Posted by Molly Swetnam-Burland at 16:53
0 comments

I have just discovered a new resource (new to me, anyway) that I really like. It is a catalogue of finds on display in the Naples Museum, sorted according to type and location, and including inventory numbers. It's not complete, but it's very useful. There is a sister site on finds from Pompeii, but this doesn't have much on it yet. I guess that both are works in progress. I wish I knew who was responsible for them - does anyone know?Whoever it was, I'd like to say thank you!