Check it out here. The site is in Italian, English and Spanish, and includes information about how to get to Pompeii, Herculaneum, Boscoreale, Stabiae and Oplontis, how to buy tickets, suggested tourist itineraries, opening hours, events and exhibitions and even rules for visiting.
Posted by Jo Berry at 19:15
0 comments

Interesting view on the eruption originaly published on the 24th of August.

This day in 79 CE began as any other. The inhabitants of the Roman city of Pompeii were going about their business; the men were bathing in the bath houses, slaves were doing their chores, merchants were selling produce in the market.

Suddenly, the ground began to shake, and from the caldera of the Mount Vesuvius towering ominously above the city, a tremendous force was unleashed.

Within seconds, a fiery cloud of smoke with temperatures reaching 250 degrees Celsius descended on the plains below, killing every living being in its way – men, women, children and livestock.

The catastrophic event, which according to the traditional count took place 1931 years ago today, was one of the most devastating in Roman history. Thousands perished, including much of the Roman elite vacationing in the area.

But for historians and archeologists, the eruption was an endowment that yielded a trove of well-preserved artifacts and information, frozen in time.

And now, from the Pompeii ashes, a new question arises for some: Was the destruction of Pompeii an act of divine retribution by the God of the Jews? Or rather, did Jews of the time see it that way?

The Temple had been razed by Roman legionnaires in 70 CE, only nine years earlier. So did Jews regard the Vesuvius eruption as the Hand of God punishing those who dared destroy His house in Jerusalem?

Hershel Shanks, the editor of the Biblical Archaeology Review, believes Jews indeed made the connection. In a paper titled “The Destruction of Pompeii – God’s revenge?” in the July/August edition of the magazine, Shanks cited ancient evidence to support his thesis.

Shanks recently told The Jerusalem Post that the idea to examine a connection between the two events came to him on a tour of the ruins of the Roman city located in the vicinity of modern-day Naples.

“On my own visit to Pompeii, I tried to find out when the destruction of the Temple occurred,” Shanks relates. “When I learnt of the supposed date, I thought, ‘Hey I wonder if anyone has connected the two.’” Shanks, described by the The New York Times as “probably the world’s most influential amateur Biblical archaeologist,” said he called Harvard’s Shaye Cohen, who directed him to Book 4 of the Sibylline Oracles, a text composed by “mostly Jewish oracles” shortly after the eruption.

The book first mentions the destruction of the Temple, and then seemingly refers to the Vesuvius eruption: “When a firebrand, turned away from a cleft in the earth [Vesuvius] In the land of Italy, reaches to broad heaven It will burn many cities and destroy men.

Much smoking ashes will fill the great sky And showers will fall from heaven like red earth. Know then the wrath of the heavenly God.”

The second piece of evidence cited by Shanks is ancient graffiti etched onto a fresco at a Pompeii building. The grafitti reads “Sodom and Gomorra.”

In Shanks’s opinion, the text is proof that a Jewish visitor to the ruins believed its fate followed that of the two sin cities that the Bible says were destroyed by God.

In any case, if the destruction of Pompeii was an act of divine retribution, then some Jews were also caught up in his vengeance. It is almost certain there were some Jewish individuals, perhaps a fullyfledged Jewish community in Pompeii, that perished along with the city’s gentiles.

Shanks said a fresco of King Solomon, the most ancient depiction of a biblical scene, is located not far from where the Sodom and Gomorra graffiti was found.

Also, relates Shanks, a vase with what some believe is an ancient kashrut stamp has been found in the famous ruins.

For Jews elsewhere, it is easy to imagine how news of the catastrophe at Pompeii would have been greeted with joy in light of the devastating defeat they had suffered only a few years earlier.

“It attacked the core of Roman society and, as if to emphasize the point, it extended all the way to Rome,” Shanks said. “You had the scary white and dark soot as far as Rome. There’s very good reason to conclude there was a perceived connection and in the eyes of some, God was clearly at work.”

Volcano Day (or not)

Today is supposedly the day that Vesuvius erupted in AD 79. So I just want to point out, to those of you who didn't already know it, that we don't know this for sure! This was the subject of my first ever post on Blogging Pompeii. Here is some of the bibliography on the topic, for those of you who are interested:

A flush of articles today, after a very quiet summer.

Pompei. Teatro Grande, la difesa del soprintendente Proietti
Proietti defends the reconstruction of the Large Theatre.
Pompei. L´eruzione del 79 d.C. "rivive" domani agli Scavi
If you're in Pompeii tomorrow, there will be events to mark the supposed anniversary of the eruption of Vesuvius in AD 79. In the Triangular Forum and the Garden of the Fugitives, you will be able to hear the 'sounds' of the eruption and recited passages of Maiuri's description of the eruption.

This is fantastic! You have to see it! PompeiEffect's Villa of the Mysteries (I think it's an advert for PompeiViva). No more details here - I don't want to spoil the surprise!
Posted by Jo Berry at 13:21
0 comments 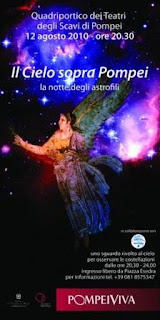 A Motorcycle Inspired By Pompeii and Decay

Curious but interesting: someone was inspired by a visit to Pompeii and Vesuvius to custom-build a motorbike! Check out the bike here. He wants $25,000 for it, if anyone is interested!
Posted by Jo Berry at 13:19
0 comments

No official news is out yet, but it seems that the Soprintendenza has quietly re-opened the Suburban Baths at Herculaneum several years after their closure for emergency works following a collapsed vault. For those who haven't have the chance to see the baths - which are truly special - these images give some hint of what they are like.

It also seems that the new Boat Exhibit will also be open full time for visits from this summer. Both these places have suffered from a lack of custodians who are needed to open more areas of site.
Posted by Sarah at 16:40
0 comments

News from LunaSet.it about plans to shoot a 3D adventure/fantasy/comedy film in the scavi with the active collaboration of the SAP! Apparently it will be distributed in English too.

I have been asked by Giuseppe Mancini to publish the following article on Blogging Pompeii, with the hope of generating discussion of the issues highlighted. The article originally appeared in Il Secolo on 23rd July 2010. There's lots to discuss, I think, but I'll let someone else start. Enjoy!

From the SANP website, news of measures intended to make the villas at Stabia more visitor-friendly by providing educative multimedia, new visitor paths and so on. Does anyone on the spot have any more information about what is happening at the villas?