Another event at the Bucerius Kunst Forum — in conjunction with their current show on Pompeii (featuring the House of the Citharist) which opens today!

Lavishly frescoed rooms in the houses of the Roman Emperor Augustus and his wife Livia are opening for the first time to the public Thursday, after years of painstaking restoration.

The houses on Rome's Palatine hill where the emperor lived with his family are re-opening after a 2.5 million euro ($3.22 million) restoration to mark the 2,000 anniversary of Augustus's death -- with previously off-limit chambers on show for the first time.
From garlands of flowers on Pompeian red backgrounds to majestic temples and scenes of rural bliss, the rooms are adorned with vividly coloured frescoes, many in an exceptional condition.
Restorers said their task had been a complex one, with bad weather during excavation threatening the prized relics of a golden era in the Eternal City.
"We had to tackle a host of problems which were all connected, from underground grottos to sewers -- and I'm talking about a sewer system stretching over 35 hectares (86 acres)," said Mariarosaria Barbera, Rome's archaeological superintendent.
To protect the site, tourists will have to book to join one of three daily groups of up to 20 people who will be taken around by a guide for a 15-minute visit.
Cinzia Conti, head restorer, said the plan was to allow people to enjoy "a more intimate, more attentive exploration of Augustus's spaces."
Read more at The Local - Italy's News in English

Posted by Jackie and Bob at pompeiiinpictures at 05:18
1 comments 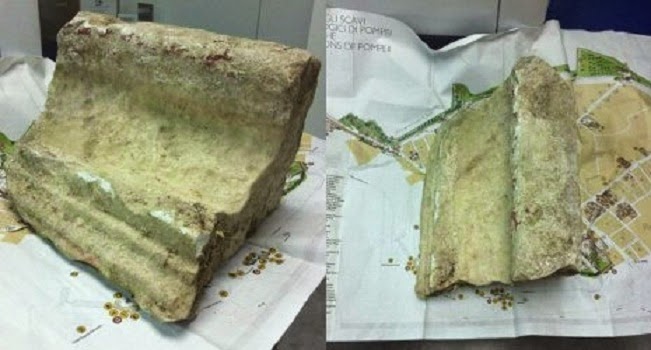 The artefact, which would have adorned a building at the site near Naples, was discovered on Monday morning in the tourists’ luggage in their rental car. They reportedly intended to fly home but were stopped by airport authorities and now face charges of appropriation of state heritage, Italian news sources said.


Posted by Jackie and Bob at pompeiiinpictures at 05:01
0 comments

Are you a mother-tongue English speaker based in the Vesuvian area? I've been contacted by an Italian student who is looking for a conversation partner to help improve his English - he's willing to pay or to offer Italian conversation in exchange. If you're interested, let me know and I can put you in touch. Thanks - Sarah (s.court[at]herculaneum.org]
Posted by Sarah at 10:00
0 comments


Fears that corporate cash will lead to Disneyfication of Italy's cultural heritage?

According to this report, Italy’s kings of fashion are poised to give this nation’s crumbling monuments a makeover to restore them to their former glory, something the cash-strapped Italian government cannot do.

They are throwing millions of euros toward desperately needed restorations in exchange for various sponsorship rights, helping spur one of the single-largest periods of archaeological and artistic renewal in modern Italian history.

Read more at: The Archaeology News Network
Posted by Jackie and Bob at pompeiiinpictures at 14:01
0 comments

Posted by Nicolas Monteix at 18:54
0 comments