It's the first article I've seen about it so don't know how verifiable it is but I'm sure there will be about a million in the press tommrow!
Posted by Alia Wallace at 17:13
0 comments

This is good news! There are a few articles in the Italian press. Below is one (plus images). Check out too the Museum website which is great.

Read the full story and see the images here.
Posted by Jo Berry at 09:15
0 comments

Pictures taken by the Associazione Nazionale Archeologi about the Temple of Jupiter, seen on the blog Astridrome:

From FastiOnline, results of the 2011 campaign of the Via Consolare Project:
In 2011, the Via Consolare Project continued excavation in the southern side of InsulaVII 6, 26 and VII 6, 27 to continue to clarify the nature of the ancient activities identified in previous field seasons and to finalise the sub-surface investigations initiated in 2008. The area of the eastern half of Archaeological Area 001, measuring roughly four by five metres, was reopened and backfill from the 2009 field season was removed. Stratigraphic excavation was then undertaken to the level of natural soils in the majority of this area, bringing subsurface examination in AA001 to a close. As a result, it is now possible to present a complete stratigraphic sequence for the southern rooms of properties 26 and 27, and to connect the associated chronology to the relative development of much of InsulaVII 6.
More here.
Posted by Nicolas Monteix at 09:57
0 comments

Pompeii and the other ancient cities destroyed and paradoxically preserved by the eruption of Mount Vesuvius in A.D. 79 are usually considered the places where one can best and most directly experience the daily lives of ancient Romans. Rather than presenting these sites as windows to the past, this exhibition explores them as a modern obsession.
More here or there.
Posted by Nicolas Monteix at 09:51
0 comments

From the Corriere del Mezzogiorno, about the loss of some plaster on the East side of the Temple of Jupiter:

From FastiOnline about the second campaign of excavation of the fulgur [conditum (?)] found by A. Maiuri in the garden of the Casa dei quattro stili (I 8, 11.17): 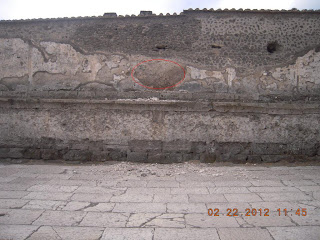 From FastiOnline, about VIII 7, 1-15:
The 2010 season for the Pompeii Archaeological Research Project: Porta Stabia (PARP:PS) represented our sixth campaign of excavations during which three trenches were excavated across the extent of I.1.1-10. This expansion – both spatially and conceptually – to include insula I.1 on the eastern side of the via Stabiana proved an important development for the project. The generous invitation of the Soprintendenza Archeologica di Pompei to include insula I.1 in our research facilitates a yet more comprehensive and detailed analysis of an entire Pompeian neighbourhood.
More here.
Posted by Nicolas Monteix at 08:28
0 comments

In today's Il Sole 24 Ore, a welcome article about the successes of the Herculaneum Conservation Project:

Superintendent replies to the Corriere article

The recent article in Corriere della Sera, which commented negatively on the state of Ercolano, has caused a huge discussion among the academic and professional community in Italy and beyond on the standards of reporting on the problems in the Vesuvian sites.
Here's the official letter sent to the Corriere's editor by the Superintendent.
Posted by Sarah at 08:50
0 comments

Posted by Nicolas Monteix at 13:43
0 comments

Does anyone have a copy of the following that they could lend me, or know where I can buy or borrow a copy?

Paolo Poccetti will give a course of thematical conferences in Paris this Spring about "Languages, cultures and ideologies in Pre-Roman Italy".
Among them:

All conferences to be held at the Ecole normale Supérieure, 45 rue d'Ulm.
Posted by Nicolas Monteix at 09:41
0 comments

Call for responses to survey on archaeological conservation needs

From AWOL, a link to a survey that points towards understanding archaeological needs for conservation informations.
If you direct an archaeological field project, please assist us by taking this brief online survey. The survey is designed to gather information about archaeologists’ engagement with conservation and identify areas in which the conservation community can improve. We would appreciate your participation whether or not you have used the services of a professional conservator, and we hope to have responses from a broad range of archaeologists working on different types of sites, both terrestrial and underwater.
More here.

This quick survey might be the occasion to revive Jo and Sarah's messages about the relationship between archaeology and conservation and the shift to less invasive projects in Pompeii that desperately lack answers.
Posted by Nicolas Monteix at 09:27
0 comments

Thank you to Irene Mañas for sending me a link to the new website of a Spanish project in Pompeii (Casa de la Diana Arcaizante, VII,6,3). The project is directed by Prof. José María Luzón (Real Academia de Bellas Artes de San Fernando-UCM). The website is under development, but it is still awesome - it wins my vote for best project website EVER!

This is the URL:  http://www.dianaarcaizante.com
Posted by Jo Berry at 09:05
0 comments

If anyone is in the London area, there is an exhibit opening tomorrow at the A.G. Leventis Gallery at the Institute of Archaeology (UCL) of images/objects of thinkgs related to Mt. Vesuvius...not sure exactly whats in it or how much will be Pompeii/Herc related but its free and should be worth a view. There is a private opening tomorrow evening at 5:30pm and it runs through 30 March. See link below or details feel free to ask me as I pretty much live right upstairs from the gallery!

Research project: Public and Private in the Roman House

Despite a not completely Pompeian subject, this interesting Finnish project is close enough to be mentioned, as has already been the call for paper about "Public and Private in the Roman House and Society" (deadline 15 April), to be held in New York in October 2013.

Private and Public Sphere in the Roman House: Semantics, Archaeology and Performative Theory

A collaborative study to be executed at the University of Helsinki, funded by the Emil Aaltonen Foundation. Project director: Dr Kaius Tuori

The aim and objectives of the research

Studies on the domestic space in Roman context have shown that the private house (domus) was the economic and social centre of its owner, his or her family and associated persons. Houses were designed to suit both the private life of its occupants and the demands of public life. Movement inside houses and the use of space was guided with the help of decoration and structures. The Roman house was open for outsiders to a certain extent, which made the division between public and private spaces inside the domus a very interesting topic already to Romans themselves.

The purpose of this project is to explore the public and private spheres of the Roman house from the first century BCE to the second century AD through a re-evaluation of the material remains and literary evidence. As an interdisciplinary enterprise, the project seeks to combine historical, archaeological, philological and architectural analysis to further the understanding of the function of the domus as a place for social, cultural, political and administrative action. Often overshadowed by modern presuppositions regarding the functions of spaces within a home, the tradition of assigning a single purpose to each space has only recently been subjected to serious criticism due to the contradictions of material finds with the assumptions regarding the use of that space.

Posted by Nicolas Monteix at 08:17
1 comments

Article: Modeling Hypotheses in Pompeian Archaeology: The House of the Faun

A new article about the Alexander mosaic has just been uploaded to Academia.edu. It uses 3D technology to reconstruct lighting conditions and suggests that the installation of the mosaic, most likely in the Roman period, was accompanied by major rennovations in the house.

Modeling Hypotheses in Pompeian Archaeology: The House of the Faun

Abstract
The archaeologically accepted plan of the House of the Faun at Pompeii serves as the basis for an initial 3D computer model that employs a simulated lighting script to render the lighting conditions of interior spaces at different times of the year. The model reveals that the Alexander Mosaic, lifted in 1843 and moved to the Museo Nazionale in Naples, was apparently never seen under optimum lighting conditions in its original setting. The problem is solved by providing a new interpretation of modifications made to the colonnades associated with the mosaic and then reconfiguring the model accordingly. The result is a new reconstruction of the architectural setting of the Alexander Mosaic and a new understanding of its original lighting conditions.


Invitation for Applications for The ANDANTE TRAVELS ARCHAEOLOGY AWARD 2012

Do you have an archaeological project in need of funds? Some post excavation work requiring specialists? A field survey lacking vital equipment? An excavation without tools? Or indeed almost any sort of exciting project, research, education or publication based?

Applications are being invited for the annual award of £2000 for an archaeological project of any professional nature anywhere in the world.

Andante Travels is a company owned and run by people who have trained and worked as archaeologists, and the mission of our company is to provide programmes of the highest academic integrity which are also relaxed and enjoyable holidays. We want everyone to discover what an exciting interest archaeology can be, whether pursued half way round the world, or in one’s own back garden.

The purpose of this award is to give something back from our own archaeologically-based business, and to heighten awareness of individual projects of very different natures.

Past Winners have been:

Volubilis, Morocco
- £2000 towards website development and signage on site

Stonehenge Riverside Project
- £2000 towards fees for a site supervisor

Via Consolare Project in Pompeii
- £2000 towards equipment for excavation

Lamanai Maya site in jungle, Belize
- £2000 towards training a local person to be a pottery conservator

Smaller donations have been made to:

Nola site in Italy (victim of an ealier eruption of Vesuvius during the Bronze Age, with similar effects in terms of conservation problems)

The application process is simple. Write your proposal on a single side of A4 paper giving an outline of the project, and what the funds might be used for and email it to Alex Casey at alex@andantetravels.co.uk

Fame and fortune awaits you!
The Andante award will be presented at Current Archaeology’s Annual Conference to be held in London on 2nd/ 3rd March 2012.

Applicants should be happy for details of their project to be promoted on the Andante website: www.andantetravels.co.uk and by applying, give their consent to this. We have about 17,000 people on our database and a well-visited website, so there is the potential to give exposure to all projects. Some of our guests have given altruistic help to needy projects in the past.