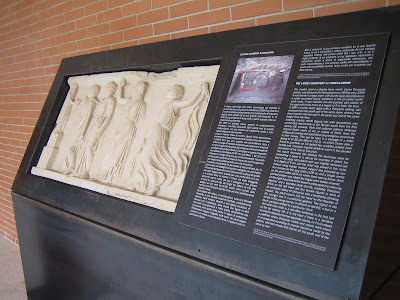 Latest mini-project carried out by the Superintendency at Herculaneum has been the creation of a copy of the marble relief found last year in the newly-named House of the Dionysian Reliefs in the Insulae Occidentalis (the corner of the ancient city that lies in the Villa of the Papyri archaeological area).

The copy has been installed at the ticket office at Herculaneum so that visitors can take a good close look - and touch it! The relief is also planned be one of the stops on a visit that is being designed for the blind and visually impaired by the Herculaneum Centre in the context of the Superintendency's ongoing commitment to provide greater access to the sites and their artefacts.

Here's a copy of the English text that accompanies the relief:

The latest discovery at Herculaneum
The marble relief on display here, which shows Dionysiac scenes, was discovered in Herculaneum on 18 February 2009. It was found in a large room with fourth-style decorations in a partly excavated luxury residence in the so-called north-west insula. It was inserted into the painted wall plaster of the east wall of the room at a height of 2 m from the floor.
In 1997 a similar relief, again with a Dionysiac setting, was removed from the south wall of the same room, where it had been inserted into the wall in the same way and at the same height from the floor.
Inserting marble reliefs (typoi) into wall decorations was particularly fashionable in the Roman world from the first century BC onwards. Rich and cultured patrons obtained original Greek works of art, or copies of them, from the antiquarian market and used them as prestigious ornaments in their homes. This can be seen in a passage of a letter dating to 67 BC (ad Atticum 1.10.3), in which Cicero asks a friend to purchase on his behalf two sculpted puteals (well heads) and, moreover, marble reliefs to insert in the painted decoration of his villa at Tusculum.
The recent discovery has allowed the technique used for embedding a typos in a wall to be recorded in detail: the face of the opus reticulatum wall was slightly hollowed out to a depth of 5 cm and the relief was placed in this niche without using mortar. Instead support was provided by two iron cramps on the long sides (1.08 m) and a single cramp on the short sides (0.66m) where there was no frame. Once painted plaster was added the edges were totally covered.
On the right-hand side of the Greek marble relief are a dancing Maenad and a bearded male divinity, probably Dionysius. While on the left there are two female figures in front of an archaistic statue of Dionysius with a kantharos (drinking vessel). The adult woman has her hand on the shoulder of the younger one in a protective gesture. The object in the hands of the young woman is difficult to identify: a tool or a torch, perhaps related to a particular ritual.
The relief was made in a neo-Attic workshop in the first half of the 1st century AD. It is not clear if there is a narrative connection between the two separate scenes, or if it is instead a pastiche where Dionysiac motifs and scenes were mixed or re-presented according to precise decisions made by the patron, who had chosen this theme for the south wall of the room as well.