Reconstructing the history of the Pompeia, Saratoga Springs

I finally got the chance to have a look at some of the links sent in after my previous post on the Pompeia of Saratoga Springs (thank you to those of you who commented on this!). In particular I had been wondering what happened to this building (after all, the Pompejanum of Aschaffenburg can still be visited today), and I was intrigued by the idea that this wonderful building may now be the base of an advertising company. So I googled 'Pompeia', 'Saratoga Springs' and 'advertising' and came up with the name of advertising company, Palio. A brief exchange of emails with Lori Goodale at Palio revealed that Palio is indeed based in the Pompeia. Lori very helpfully shared the information that Palio hold in their files about the building and a current photograph of the atrium. So here is my potted history of the Pompeia, based on what Lori gave me and a few extra things I've been able to dig up. 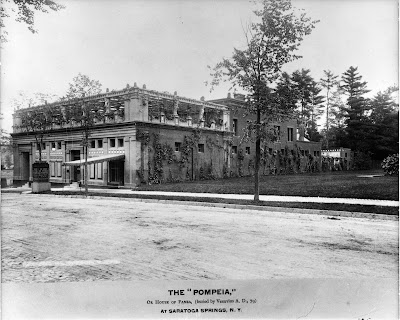 The Pompeia was built in 1889 by Boston hardware merchant and architect, Franklin Webster Smith, once dubbed 'Reconstruction Smith'. He had already built the Villa Zorayda in St Augustine, Florida (a Moorish Palace) and the Casa Monica Hotel, also in St. Augustine (another Moorish castle but on what seems a far larger scale; the website contains historical images of the hotel, which are amazing). Smith was described as 'a man of vision and foresight' who wanted both to enhance Saratoga's prosperity and her cultural and intellectual standing. Apparently he had a personal distaste for horse-racing and gambling, for which Saratoga was famous. He would go on to design the Halls of the Ancients in Washington D.C.
The Pompeia was described as a replica of the House of Pansa, but in fact it seems to combine elements from the architecture and decoration of several different Pompeian houses, along with other random antiquities. Smith commissioned artists and historians to copy the architecture, statues and paintings that 'would show the life of a Roman nobleman'. He also purchased countless works of art and ancient artifacts during his 14 trips to Europe and they were displayed in the Pompeia.
There was a 'Salve' mosaic in the fauces, with porters' room on either side and a cave canem mosaic at the entrance of the atrium. All the furniture in the atrium - tables, chairs, couches, musical instruments, tripods, candelabra - were copied from originals in the Naples Museum or from wall-paintings found in Pompeii or Herculaneum. Cabinets of busts of ancestors and family archives, located in the tablinum. The ceiling here was decorated with copies of mosaics from the Villa of Diomedes (I don't know which ones!). There were copies of papyrus rolls and a replica of a strong box from the Naples Museum. There was a lecture hall decorated with a painting of the 'Grandeur of Rome at the Time of Constantine', 50 feet long by 11 feet high. This painting was badly damaged in a fire (see below). 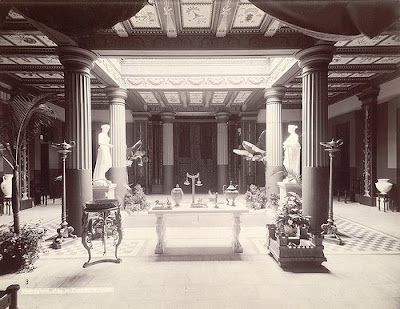 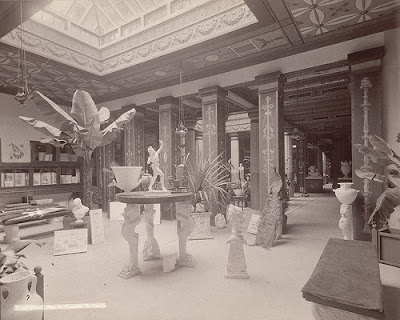 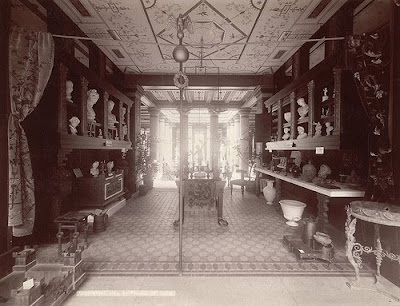 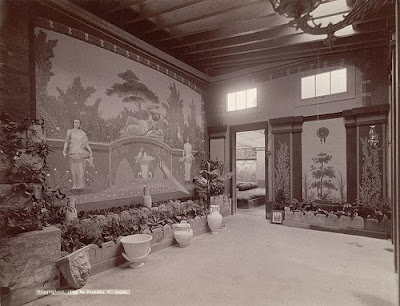 Smith's intention was that the Pompeia would become an annual excursion for all the schools and colleges within 'a day's ride' of Saratoga. The entrance fee was 50 cents and for a few brief years the Pompeia was a famous tourist destination.
Smith had other plans for Saratoga, too, but the majority of them never saw the light. He went bankrupt and the banks foreclosed on the Pompeia in 1906. However, the building is still standing and has enjoyed (or perhaps suffered) a varied history since 1906. In 1914 the Pompeia was bought by the Masonic Hall Association and was used by the local Masons for 30 years. On Christmas Eve 1926 a fire destroyed parts of the Pompeia, including many of the Roman relics and a hallway of Egyptian murals and artefacts. Local photographer George S. Bolser was a child when this occurred and recalled Egyptian mummies lying smoldering on the street while the police chased away curious kids! The Masons sold the Pompeia in 1952 and it became a Synagogue and Jewish Community Center until 1989. I've not been able to discover how the building was used between 1989 and 1999 (the year that Palio moved in). Below is a photo of the atrium of the Pompeia today. I love the green columns and the painting of what I think is the Saratoga racetrack in the background. 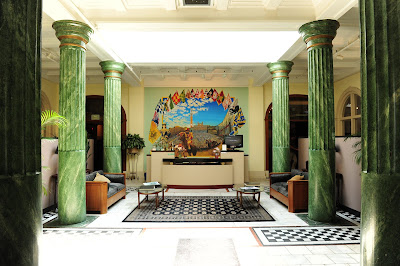 The photo of the external facade and the atrium as it is today were provided by Lori Goodale of Palio (the first may be from the George S. Bolser Collection); the other photos are from Flickr.
Posted by Jo Berry at 09:40

As with all research, I was looking for something completely different but stumbled across an interesting article relating to the Pompeia Villa in Saratoga Springs should it be of interest. The article is as follows:
"The Pompeia" at Saratoga
Author(s): W. R. Bradshaw
Published by The Decorator and Furnisher, Vol. 16, No. 5 (Aug., 1890), pp. 156-159

It gives a lovely plan of the villa and some photographs as well a lovely description of being taken around the house. Can send on a PDF if it is still relevant - I note that this was all being posted way back in 2009.