For those who don't yet know about this exciting new project, which is currently in the field: 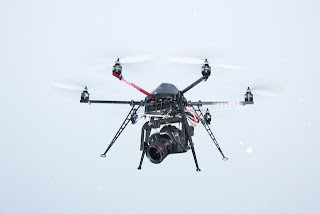 Project Aim
The aim of our project is to test the application of aerial drone technology in the documentation and survey of built structures in an archaeological context (Pompeii) against traditional methods of architectural investigation. Our project is carried out in collaboration and with the support of two existing projects which have been working for a number of years on the site at Pompeii: the Expeditio Pompeiana Universitatis Helsingiensis and from the University of Helsinki (Finland) and Pistrina: les boulangeries de l'Italie romaine of the École française de Rome. The former of these projects has been working at Pompeii for approximately 10 years studying the Casa di Marco Lucrezio and other properties of insula IX, 3 while the latter aims to provide a comprehensive re-examination of all of Pompeii’s bakeries (pistrina). Our project is generously sponsored by Landinspektørfirmaet LE34 A/S (Copenaghen) and with very kind permission of the Soprintendenza Speciali per i Beni Archeologici di Napoli e Pompei.

Our Methodology
We use a remote-controlled aerial drone to take geo-referenced digital photographs (see attached). These photographs will then be developed to create 3D panoramas, ortho-photos and a 3D model of insula IX, 3 and a selection of Pompeii’s bakeries. We will also employ a laser scanner in order to provide a framework for the digital model. This model will then be fully integrated with, and will complement the surveys conducted by the projects already indicated. It is hoped that this methodology will not only allow us to survey the structures in a far more rapid and detailed way than has previously been possible but which will also potentially establish a new methodology for architectural survey that would be of use to other archaeological projects at Pompeii or elsewhere. Finally, besides the highly detailed 3D digital model, it is hoped that the drone will allow us to provide us with unique images and previously unrealized perspectives of a part of Pompeii’s standing remains!

The Drones!
Our aerial drones (see attached) offer a previously unparalleled opportunity to remotely and quickly survey standing structures. The drone typically flies for 8-10 minutes at a time and it can follow a pre-programmed set route or altitude and it will come back to you at the press of a button and its flight can be followed by a small inbuilt camera. The attached camera can take HD photographs or films including 360 degree recordings. The drone has several gyroscopes and GPS on board that keep it in position and it handles winds automatically. These features enable the drone to take geo-referenced HD photographs, accurate down to 0.01 m accuracy, which are simply impossible from traditional balloon-based cameras or other aerial survey methods. As the drone can take many hundreds of photographs in a single flight our method also allows us to complete the photogrammetric survey far more rapidly than by a traditional hand-held method, which can be highly time-consuming. Moreover, these features also allow the drone to maintain a controlled, safe and consistent position even in windy conditions!
We are in the field conducting our survey now and will be posting a daily blog from Pompeii on our Facebook site (see below) and then publishing the development and results of the models in due course. We are really excited about this project; to my knowledge, this technology has never been employed at Pompeii before!
I hope you find this interesting too and if you would like to know any more please just drop us a line.
James Andrews
Project Director
Pompeii Aerial Survey Project
http://www.facebook.com/pompeiiaerialsurveyproject
pompeiiaerialsurveyproject@gmail.com