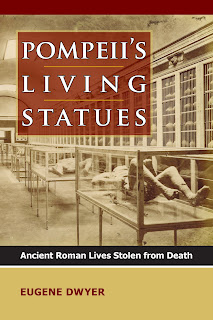 My congratulations to Eugene Dwyer on the publication of his new book 'Pompeii's Living Statues. Ancient Roman Lives Stolen from Death'!

I was fortunate enough to have the opportunity to read this book a couple of months ago, and I liked it so much that I want to write a few lines about it.

When Fiorelli made his first plastercast of the body of a victim of AD 79 there were journalists present. This is perhaps a side of Fiorelli that many of us have failed to see before. 'Pompeii's Living Statues' describes how good he was at finding an audience for Pompeii, how he encouraged foreign scholars, artists and commercial photographers, and his exploitation of 'prestige' finds. He even had copies of casts made as gifts for Kaiser Wilhelm II.

However dramatic and evocative the creation of these casts, they were never sent to the Naples Museum because they were not works of art. They were housed on site, and presented to the public as a collection. The tradition of collecting is an important theme in Dwyer's study. Until the unification of Italy, the main purpose of the excavation of Pompeii had been to provide artefacts for collections, and this explains why the plastercasts were displayed according to technical skill/appearance rather than archaeological context. But they also provided a means for viewers to finally see (rather than imagine, on the basis of written descriptions and artistic renditions) the suffering of those who died in the eruption of Vesuvius in AD 79. They represented the advent of new scientific methods and symbolised a new purpose to archaeology.

Dwyer's study explains how Fiorelli's exploitation of the plastercasts of human bodies came to embody the new historical consciousness that came to the fore at the unification of Italy in 1860. From this time there was a revolution in the understanding of volcanology, the attitude of the State towards archaeology, and in the administration of Pompeii as an archaeological site. The plastercasts were iconic symbols of these changes. They are the focus of Dwyer's book, but through their study he manages to illustrate in the clearest manner possible how attitudes changed and developed over the entire history of the excavations of Pompeii (up to 1900).

'Pompeii's Living Statues' is a great book. There is such a wealth of detail that I can only imagine that it took years to put it together. I learned an enormous amount, and I think that everyone who is interested in Pompeii should read it!

[The Amazon page claims that the book has not yet been released, but this is wrong and they are sending out the orders!]
Posted by Jo Berry at 11:10

Congratulations, Gene! I'm looking forward to reading this as well.

This is an extremely well written and well researched book.

Professor Dwyer has done a superb job of examining the Fiorelli era at Pompeii (1860-1875). His book provides a fascinating account of the social, political and historical impact of Dr Fiorelli's work on the vesuvian sites, as well as the events leading up to, and immediately following, his time at Pompeii. The book correlates numerous direct observations and accounts of the early archeological work, and presents them in a highly readable format.